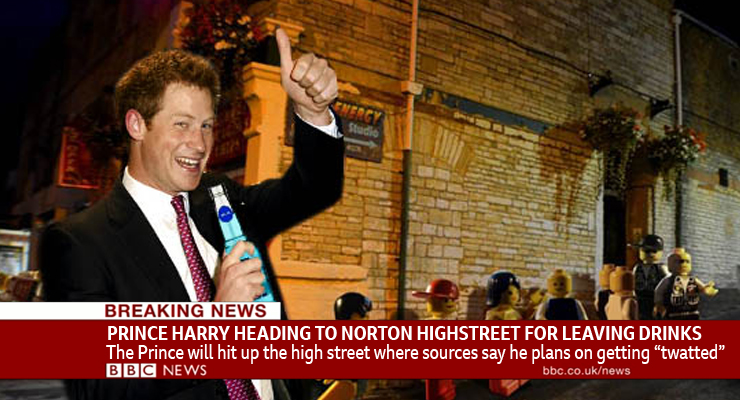 A spokesperson for Buckingham Palace has confirmed Prince Harry’s official leaving drinks doo will be the usual Norton high street pub crawl, scheduled for next week, with a “higher than usual” chance of winding up in Fat Sams.

A spokesperson for the prince has advised attendees to be at Wetherspoons at 7pm sharp for some “cheeky bombs” before hitting venues including Greyhound, Riverside, Crossways and Mallards.

Everyone has been invited, but one person who may or may not attend is local resident Jerome Bustyfield.

“I’ll see on the night if I can be arsed.

But to be honest, the last leaving party I went on I ended up forking out a tenner for a present and the guy came back two weeks later.

I’ll tell you now, I’m not being stung like that again.”

Official sources at Buckingham Palace have remained tight lipped as to whether a trip to Fat Sams will be on the cards.

“That will depend on the entrance price at the time Harry and his friends realise they need to ‘get a move on’. However, what we do know is that the night will end like all other great nights.

Muttering incoherently into a doner kebab outside Charcoal Grill while taxi drivers refuse to let you in.”